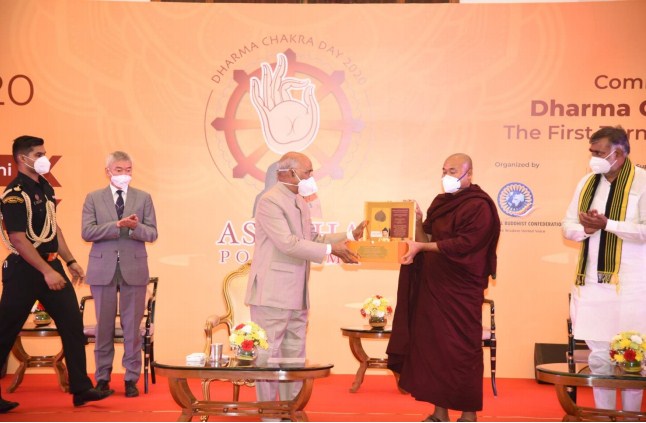 It was on this sacred day that Tathagata Gautama Buddha, after his Enlightened Awakening in Bodhgaya came to Risipattana in present day Sarnath, near Varanasi in India, and gave the teaching of Dharma Chakra Pravattana Sutra to his first five disciples and formed the first Sangha. The teaching comprised of Four Noble Truths and the Noble Eightfold Path.

IBC has decided to celebrate Dharma Chakra Day annually as its flagship event in association with its member organizations in 36 countries.

The commemoration of AsadhaPoornima - Dharma Chakra Day began with chanting of Dharma Dharma Chakra Parvattana Sutra by Theravada and Mahayana Sangha from the MulagandhakutiVihara temple, Sarnath which was live-streamed for the global audience.

The highlight of the inaugural event was the unveiling and presentation of the digitized publication of Mongolian Kangyur by Hon’bleMinister of Culture to Hon'ble President of India. Kangyur as it’s called in Mongolian and Tibetan languages is translated Tripitika or the entire collection of texts regarded as Buddhavacana or “Buddha-word”. Each set of Kangyur has 108 volumes and this invaluable publication was compiled by Dr. Lokesh Chandra from the archives of late Dr. Raghu Veera. It is published by National Manuscripts Commission and courtesy of Indira Gandhi National Centre for Arts under the aegis of Ministry of Culture. It is an offering from India to the people of Mongolia on whose behalf the Ambassador of Mongolia received one copy.

Later in the day video messages by Supreme heads of the Buddhist Sanghasof various countries and Eminent Masters including His Holiness the Dalai Lama and Scholars from around the world were also streamed. Live streaming of prayers and ceremonies from Mahabodhi Temple, Bodhgaya and Sacred Tooth Relic Temple, Kandy Sri Lanka was done along with the streaming of chanting of DhammaCakkaPavattanaSutta at Golden Dome, WatDhammakaya, Thailand, as well as by nuns sangha of JamyangCholing Institute, Dharamsala, India were also streamed. The story of First Sermon by Attodeepa group of Kolkata and Guru Padmasambhava by students of Indian classical dance Guru AlpanaNayak were other highlights of the day.

The successful hosting of AsadhaPoornima- Dharma Chakra Day under such trying times of Covid 29 pandemic is testimony to IBCs goodwill in the Buddhist world.
The virtual celebration was viewed by 1, 43,375 viewers from 24 countries.