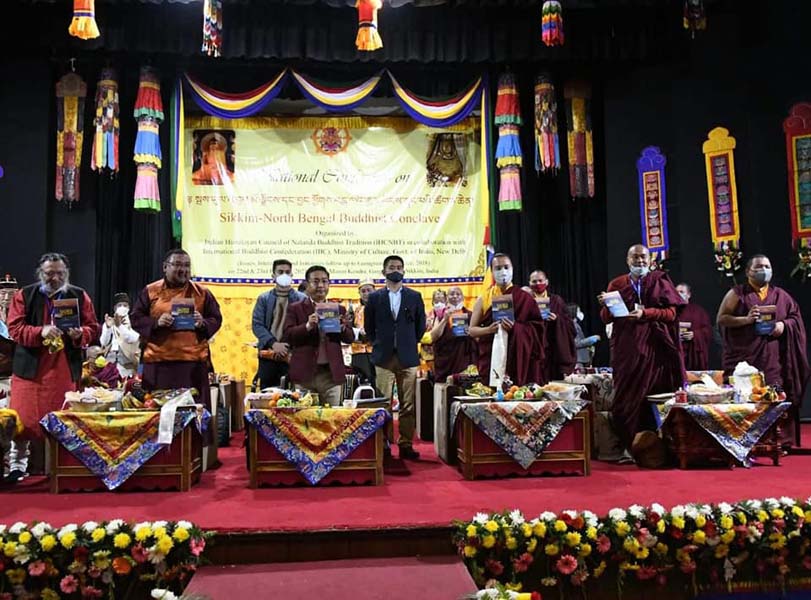 The programme was organized by Indian Himalayan Council of Nalanda Buddhist Tradition (IHCNBT) in collaboration with International Buddhist Confederation (IBC), Ministry of Culture, Government of India, New Delhi, and supported by the Ecclesiastical Department, Government of Sikkim.

Hon’ble Chief Minister, in his address, expressed his pleasure to be part of the august event. He said that Sikkim has always had the blessings of Guru Rimpoche in the form of his profound teachings. He said that Buddhism permeates compassion and it should be our effort to carry out enlightened activities in any way that will guide us ensuring benefit and well-being in both the short term and the long term.

The Hon’ble Chief Minister further said that in the Himalayan Region, Buddhist heritage is undergoing a rapid transformation in its polity, culture and socio-economic changes leading to strategic challenges, which is one of the powerful factors for cultural mobilization and social stability in Himalayan region and will continue to play a key role in future consolidation of the strategic area of the country.

In conclusion, he said that the government will work towards strengthening the traditional structures that will establish greater understanding and harmony among various Buddhist communities for larger good of humanity, peace and harmony.

Hon’ble Minister Shri Sonam Lama in his address appreciated that a Conclave of such stature is being held in Sikkim. He urged the learned audience to continue to work towards preservation of Buddhist culture and tradition. The Hon’ble Minister further said that Buddhism always focused on wisdom-based education system which leads to right understanding of any subject. He further said that education system must be ingrained with knowledge and preservation of culture through development process. He further extended his gratitude to all the learned scholars who were present in the conclave.

Venerable Dr. Dhammapiya, General Secretary, International Buddhist Confederation, while expressing his pleasure on being part of the Conclave, informed that International Buddhist Confederation is a global umbrella for Buddhism with members drawn from 39 Countries working mainly on issues related to global nature, human existence, environment and harmony of co-existence. He stated that Buddhist teachings have reached different places and have become part of the culture of different countries and its people. He further said that in course of time differences in terms of interpretation of teachings, practices, performing rites and rituals have developed. He attributed this to dynamism and said that there was nothing wrong in it. If something is static it will collapse but if something is dynamic it will survive in different form, he explained. He informed that International Buddhist Confederation is working with International Organisations where they have Dharma Councils on international aspects of Buddhist Society and humanity at large.

Venerable Khenchen Chowang, Chief Abbot of Gonjoang Monastery briefed about the Importance of Nalanda Buddhist Tradition. He said that Nalanda University gave us some of the greatest scholars who contributed towards Buddhism. He said that main idea behind this Conclave is to come together, know each other and to find out what is our strength and weakness and this platform has the potential to draw people from different places, religion following Buddhism in different ways to connect and discuss issues and challenges and to look forward for collaboration, cooperation and to sustain our own culture, heritage, language and faith.

Smt Kincho Doma Lepcha, Special Secretary Ecclesiastical Department presented a brief report of the activities of the department. She informed that Sikkim has more than 1133 religious institutions of various faith and communities which exist harmoniously. She said that the co-existence of various faith influenced by the flavor of spiritualism is maintained by the State Government through Ecclesiastical Department which is the oldest and unique department that has its existence since the days of monarchy. She informed that the unique character of the department was carried out even after the State merged with Indian Union and became a part of India in 1975. She informed that there are 96 monastic schools and 11 Sanskrit Pathshalas under the supervision of the Department.

Earlier, the Chief Guest and dignitaries released the Conclave Brochure.

An Introductory Note on the programme and briefing was delivered by Shri Maling Gompu, General Secretary, International Buddhist Confederation (IBC).

The inaugural ceremony concluded with the vote of thanks proposed by Shri Tshering Wangchuk Lepcha, Additional Political Secretary (East) to HCM.