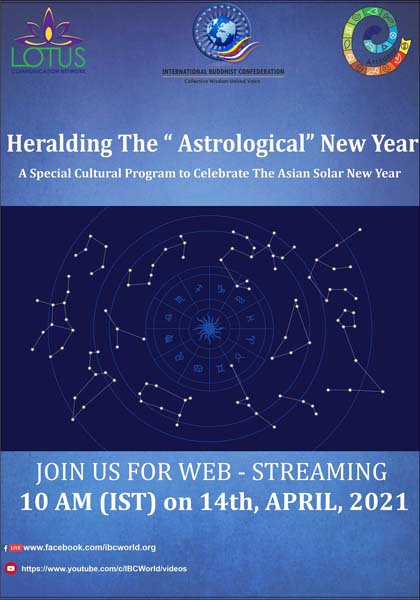 For centuries million of Buddhists - as well as Hindus and others – have celebrated the New Year across much of Southeast and South Asia, based on astrological sciences, when the sun moves from the House of Pisces to the House of Aries in the celestial sphere. That happens between 13 and 14 April in the Christian calendar. Thus, April 14th marks the dawn of a New Year.

On April 14th a special 90-minute webcast will mark this festive occasion. Produced by Lotus Communication Network and Attodeep in association with the International Buddhist Confederation, this program will reflect the colour and vibrancy of the festivities across Asia.

The festival s celebrated in a grand scale in Buddhist countries of Sri Lanka, Thailand, Myanmar, Laos and Cambodia. Thus, we will bring you features on the celebrations, songs, music and dances associated with the festival from these countries along with descriptions of the festivities from local experts.

In Sri Lanka, the festival is called “Sinhala and Hindu New Year” and the program will explain the traditions involved and will bring you snippets the celebrations in Sri Lankan villages.

Attodeep from Kolkata brings you a special feature on the Bengalis love of festivals with a colourful dance drama that reflects the rich folk music tradition of Bengal that includes Bangladesh.