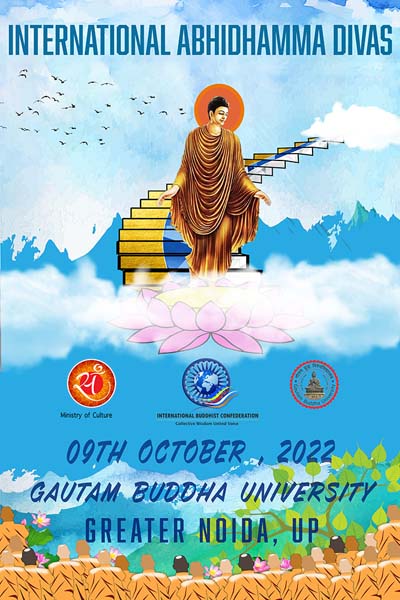 The International Buddhist Confederation (IBC) in collaboration with Gautam Buddha University (GBU) will celebrate the 'International Abhidhamma Day' at the varsity campus in Greater Noida on Sharada Purnima which will fall on October 9.

The day marks Lord Buddha's return from heaven to the earth after preaching the Abhidhamma Pitaka to his mother.

In Buddhism the Abhidhamma Pitaka is an important scripture.

It was at Sankassiya, presently known as Sankisa Basantapur, Farrukhabad, Uttar Pradesh that the Buddha returned to earth.

The participation of the Chief Minister Yogi Adityanath, Chancellor, Gautam Buddha University as the Guest of Honour is yet to be confirmed.

The Abhidhamma Day in 2021 was organised at Kushinagar at Mahaparinirvana Temple,

where the Prime Minister Narendra Modi was the Chief Guest. He also inaugurated the international airport at the Buddhist pilgrimage town.

According to the Theravada tradition, it is believed that this day is blessed as Buddha had gone to heaven to teach Abhidhamma Pitaka to his mother. The teaching took three months after which Buddha came back to the earth. His followers mark the three-month time by staying at one place and praying. It is known as the three-month rainy retreat - Varshavaas or Vassa - for the Buddhist monks and nuns.

Sankisa Basantapur is documented by the Ashokan marker - Ashokan Elephant Pillar, signifying the importance of the place and of the event. It is noted in the Buddhist texts that after teaching Abhidhamma to the 'Devas' and his mother as witness, he descended here.

Eminent monks from Sri Lanka, Myanmar, Nepal, Bhutan, ambassadors based in India and other diplomats representing various countries will also take part in the Abhidhamma Day celebrations at GBU.

This is the third flagship programme of the IBC; the other two being Buddha Purnima and the Asadha Purnima.

Other highlights of the day's event include a panel discussion on the 'Significance of Abhidhamma', a book launch, screening of the film on IBC's project in Lumbini and a cultural programme by students of Buddhist Universities.

The IBC is a Buddhist umbrella body that serves as a common platform for Buddhists worldwide. It is headquartered in New Delhi.