Blessings and global good wishes for IBC on the 10th Anniversary celebrations. 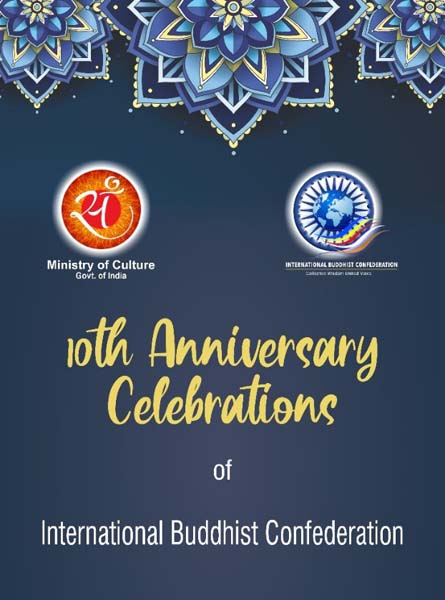 Blessings and global good wishes for IBC on the 10th Anniversary celebrations.

The IBC marked its 10th-anniversary celebrations with blessings and good wishes from eminent Patriarchs of the Buddhist Sangha, leading monks and nuns, diplomats, and long-standing members of IBC- chapters from around the world, who participated both physically and also joined virtually in New Delhi on Saturday, 5 November. In his message, the Most Ven Jinwoo, 37th President, Jogye Order of Korean Buddhism, South Korea while stating that he had great faith in IBC to continue contributing significantly to the global dissemination of Buddhism, appreciated IBC’s efforts in restoring Buddhist holy sites and internationalising Buddhism. The 24th Pandito Khambo Lama Damba Ayusheev, Head of the Buddhist Tradition Sangha of Russia in his message noted that the 10th anniversary was very dear and important for the Buddhists in the two countries. “For many centuries the Sangha, united for the sake of Teaching and wisdom, maintained this light in our hearts. Like the growing moon, it grows, and its pure light dispels the darkness of ignorance", read the message of the Head of the Buddhist tradition Sangha of Russia. As such, long before concluding the political alliance, India and Russia have been tied by the spiritual roots of the Buddha’s teachings. This tie will be alive as long as this world exists and will keep faith and compassion in the hearts of our peoples, the message read. Commending IBC’s commitment to lend a collective voice towards issues of Buddhist and global concerns, consistent with Buddhist values and principles, His Holiness 43rd Sakya Trizin Khondung Gyana Vajra Rinpoche, Head of Sakyapa order of Tibetan Buddhism, Uttrakhand, added that IBC’s decade has been in the service of representing the rich diversity of Buddhism. The guest of honour, Kyabje Yongzin Ling Rinpoche of Drepung Loseling Monastery, Himachal Pradesh inaugurated the event by lighting a lamp and offerings flowers at the feet of the Buddha. The other participants were IBC- Chapter’s eminent officer bearers Ven Khenpo Chimed, Secretary, IBC, Nepal, Dr. Damenda Porage, Deputy Secretary General, IBC, Sri Lanka and Mr. Thierry Dodin, Executive Member, IBC, France, among others. Members of the diplomatic community from Mongolia, Russia, Belarus, Thailand, South Korea, and Bhutan were also present at the event. Leading the IBC’s members and its Chapter representatives who participated virtually was Ven. Lama Lobzang, Working President, and founder President of the world body who shared his thoughts and blessed the organisation from New Delhi; others, who spoke were Most Ven. Jetsunma Tenzin Palmo, President, IBC, India, Dr. Ms. Aye Hnin Thwin, Vice President, IBC, Jamaica, Mr. Sotha Ros, Vice President, IBC, Cambodia, Ven. Khemachara Bhikkhu, Secretary, IBC, India, Dr. Barbara Maas, Secretary, IBC, U.K, Khen Rinpoche Nicholas Vreeland, Executive Member, IBC, India, and Dr. Shermila Milroy, Executive Member, IBC, Sri Lanka. The highlight was a photo exhibition showcasing the 10- year journey of the IBC, including a display of its future projects. The programme also featured the inaugural screening of a short film on Buddhism and IBC’s contribution in the last decade.