The story of the International Buddhist Confederation 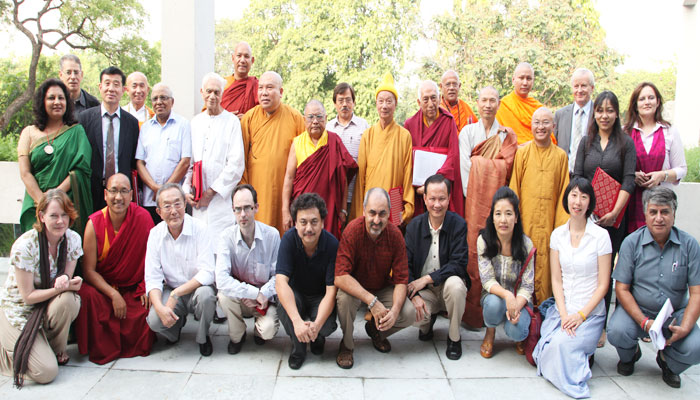 The story of the International Buddhist Confederation

The seeds of the International Buddhist Confederation were sown in the Autumn of 2010, during Ven. Lama Lobzang’s visit to Sri Lanka. There, some respected Sangha members suggested that India host a large-scale international Buddhist conference. The planning then began for one of the largest international gatherings of Buddhists ever to take place on Indian soil – the Global Buddhist Congregation. The suggestion was then made that a permanent umbrella body should be formed to carry the work and vision of the Global Buddhist Congregation forward into the future and to represent the enduring interests of Buddhism in the world.

From August 27-28th 2011, a working sub-committee met at the India International Centre in New Delhi to prepare the ground for the formation of this international Buddhist body.

In November 2011, New Delhi was host to Global Buddhist Congregation (GBC) that was attended by over 800 delegates and observers from Buddhist organizations and institutions from around the world, who came together to address common issues facing the modern world from the perspective of the Holy Dhamma.

Under the banner: Collective Wisdom: United Voice, the attendees of the GBC unanimously adopted a resolution to form an international umbrella body – the International Buddhist Confederation (IBC). The purpose of this body is to create a role for Buddhism on the global stage so as to help to preserve our heritage, share our knowledge, and promote our values and to represent a united front for Buddhism to enjoy meaningful participation in the global discourse.

Regardless of the doctrinal differences within the rich and varied Buddhist traditions, there is far more that unites us than divides, and the IBC provides the foundation for the growth and development of this common ground. The IBC is blessed to include the Holy Sangha and eminent representatives of Buddhist lineages, organizations, institutions, and monastic bodies worldwide as Founding Members and Signatories to its Charter.

Included in the Charter, that was finalized during the GBC on November 30th, are the following aims and objectives:

A sub-committee meeting was held on December 3, 2012, attended by delegates from the United States, Bhutan, Mongolia, Russian Federation, Nepal, and India, during which an Organising Committee along with Working Committees on agenda, membership, electoral process, projects, and funding, were formed.

During the upcoming 1st Founding Members Conclave, the provisional Governing Body was dissolved and the Founding Members elected the new Governing Body and Office Bearers of the IBC. The members also decided on membership structure, IBC's core projects and activities and corpus funding. Working sub-committees was formed to address issues facing Buddhists in the modern world such as heritage, preservation of traditions and practices, equality issues, social engagement and the environment.

The world’s most important Buddhist heritage is located in Bihar,Uttar Pradesh and Madhya Pradesh. The states of Jammu & Kashmir have exquisite Buddhist art and early monasteries. India has many still unexcavated Buddhist sites, waiting to be unearthed.

The Indian heritage of Buddhism is unparalleled. However, its present state and lack of infrastructure, as well as lack of information and connectivity, leave much to be desired. The Buddhist people want a platform where these concerns can be addressed. A platform which can work towards preservation of Buddhist heritage sites, knowledge, traditions and culture.

Lumbini is one of the greatest of pilgrimage sites that every Buddhist desires to visit. Already, organizations of many countries are working on the development of this most historic site. The International Buddhist Confederation would like to work closely with the Government of Nepal, UNESCO and other organizations to compliment the developmental work already being done.

One of the earliest countries to embrace Buddhism was Sri Lanka. In the 3rd century BC, Sanghamitra, daughter of Emperor Ashoka, carried a cutting of the revered Bodhi Tree at Bodhgaya to Sri Lanka. Buddhism was symbolically planted, along with the holy tree, on the island. Both the faith and the venerated Bodhi Tree continue to flourish till today. The country has a rich and vast Buddhist heritage which needs to be preserved.

In fact, Buddhism had practically disappeared in India until it was revived by Anagarika Dharmapala of Sri Lanka. He not only brought attention on the material heritage of Buddhism, but was also responsible for the revival of the faith in social discourses, in India, Sri Lanka and in the world. He took the faith to three continents.

Today, commercialization has been growing all over the world and has become a grave threat to civilization itself. The peace and harmony which pervaded the entire Buddhist world is gradually being lost to the influences of materialism. Heritage monuments are becoming archaeological sites and not places of worship. If this goes on, we will lose even the most important heritage, which is of the traditions and harmonious way of life of the Buddhists.

It is time that the Buddhist organizations of the various countries must come together to act collectively. We must pool the wisdom of all and speak with a united voice, to preserve both the tangible and intangible heritage of Buddhism.

The IBC is being formed to be such a platform. In early March 2013 will be held the meeting of the Founding Members. They will represent the entire Buddhist hierarchy, as well as the major Buddhist organizations of all traditions. They will converge in Delhi to form the IBC body. They will deliberate on a working agenda of the IBC, addressing the Buddhist concerns and desires.