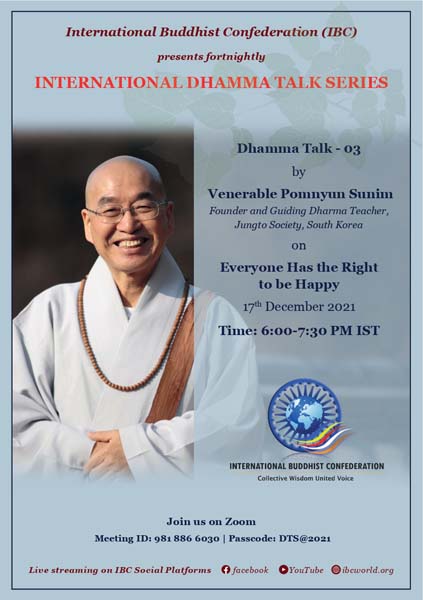 Ven. Pomnyun Sunim is the founder and the Guiding Dharma Teacher of the Jungto Society. Guided by his teacher Ven. Bulshim Domoon Sunim, he entered the Buddhist Sangha at Boonwhangsa Temple, South Korea, in 1969, and was ordained a bihikku in 1991. He is not only a Buddhist monk but also a social activist who leads various movements such as an ecological awareness campaign, promotion of human rights and world peace, and eradication of famine, disease, and illiteracy.

Venerable Pomnyun Sunim is one of the most recognized and influential religious leaders in South Korea with an active following. YouTube videos of his talks have more than 1 billion views, and his books are perennial best-sellers. With his Dharma Talks across Korea and the world, engaging in a lively, no-holds-barred Q&A with people from all walks of life, Venerable Pomnyun has become a household name as a popular mentor and spiritual teacher.

Ven. Pomnyun Sunim has been advocating a new paradigm of civilization movement in which everyone becomes happy through practice, creates a happy society through active participation in social movements, and protects our environment and the Earth by leading a simple lifestyle. This vision is expressed in the Jungto Society’s motto, “Pure Heart, Good Friends, and Clean Earth.”

Pure Heart: A Land Where Individuals are Happy​ The first and foremost aim of Jungto Society is helping individuals free themselves from suffering. 1000-Day Practice is at the core of this effort. This daily practice program offers an opportunity for people to turn their outward-looking eyes inward. By practicing one hour a day continuously and persistently, practitioners are able to be mindful, identify the source of their suffering, and free themselves from it. During livestreamed online Dharma Q&As, Ven. Pomnyun Sunim holds conversations with questioners from the audience to help them view their problems from a different perspective and become aware of the error in their perception. Other programs of Jungto Society include Jungto Buddhism Course, Jungto Sutra Course, and offline and online meditation and retreat programs.

Good Friends: A Land Where Society is Peaceful Recognizing that individual happiness cannot be insured without a peaceful society, Ven. Pomnyun Sunim has actively participated in various social movements. In 1996, he founded the Korean Buddhist Sharing Movement (KBSM), the precursor to Good Friends to help the North Korean refugees after learning about the devastating food shortage in North Korea. Good Friends led the initiative in making the international community aware about the situation in North Korea and urged rapid humanitarian aid. Also, he has been working to bring permanent peace on the Korean peninsula since 1998 and founded the Peace Foundation in 2004, an education and research institution for peace and unification of the Korean peninsula. In addition, he established Join Together Society (JTS), an international relief organization to provide relief aid and eradicate famine, diseases, and illiteracy in various developing countries around the world, including India, the Philippines, Sri Lanka, Indonesia, Cambodia, Myanmar, Afghanistan, and North Korea.

In recognition of his humanitarian work, Ven. Pomnyun Sunim received the Ramon Magsaysay Award for Peace and International Understanding in 2002 and the POSCO TJ Park Community Development and Philanthropy Prize in 2011. In 2015, he received the Kripasaran Award from the Bengal Association at the 150th Birth Anniversary Celebration of Ven. Mahasthavir Kripasaran, for his efforts in reviving Buddhism in India. He also became the recipient of the Moran Medal, South Korean government's second highest Order of Civil Merit in 2018, and the 37th recipient of the Niwano Peace Prize in 2020.